Tidal turbines are very much like underwater windmills except the rotors are driven by consistent, fast-moving currents.  The submerged rotors harness the power of the marine currents to drive generators, which in turn produce electricity. Water is 832 times denser than air and consequently tidal turbine rotors are much smaller than wind turbine rotors and therefore can be deployed much closer together and still generate equivalent amounts of electricity.

Tidal turbines are fixed to the seabed either via a gravity base or fixed (drilled) pylons. They are connected to the grid via an armoured power export cable and are typically controlled via a standard SCADA system. Our tidal turbines have active pitch and yaw and can be installed quickly offshore, once the foundations are established on the seabed.

A typical turbine has an operational life of 25 years, with a 5-year maintenance cycle.

The Atlantis turbine division is the amalgamation of two of the world’s leading tidal turbine generation teams – the Marine Current Turbines SeaGen team and Atlantis Turbine and Engineering Services team – brought together via acquisition in 2015.

Hover over page elements to highlight them, then click to create an annotation.

What is a tidal turbine?

Marine or tidal currents, unlike many other forms of renewable energy, are a consistent source of kinetic energy caused by regular tidal cycles influenced by the phases of the moon.  Intermittency is a problem for wind, wave and solar power as the sun doesn’t always shine and the wind doesn’t always blow.  These sources of renewable energy often require backup from traditional forms of power generation. However, the inherent predictability of tidal power is highly attractive for grid management, removing the need for back-up plants powered by fossil fuels.  Tidal turbines are installed on the seabed at locations with high tidal current velocities, or strong continuous ocean currents where they extract energy from the flowing water.

The unique design of subsea connection systems for the AR1500 and SeaGen turbines allows capture of the maximum amount of tidal energy whilst keeping maintenance and connectivity costs low. Unlike a wind turbine, all of the power conditioning equipment (inverters, converters and frequency controllers) are located onshore in the substation building, enabling quick and easy access in the event of unscheduled faults.

Once a foundation has been established on the seabed floor, a turbine can be installed in a very short amount of time. Typically, it takes 45 minutes to install a turbine nacelle and 45 minutes to retrieve it. No divers are involved in this operation.

Atlantis and GE have already been working in partnership since September 2018 on the development and performance validation of Atlantis’ AR2000 tidal generation system, which is expected to be the world’s largest and most powerful single axis turbine available. This record-breaking system is expected to be deployed on future phases of Atlantis’ iconic MeyGen Project in Scotland, the wider Atlantis project pipeline and will also be available for sale to commercial developers. This next generation turbine will be capable of accommodating rotor diameters of between 20 – 24 meters, site dependent, with a cut in speed of less than one meter per second and a maximum output of 2.0 MW at 3.05 m/s for a machine with a 20 meter rotor diameter.

The AR2000 has been in development for over two years and builds on the successes and lessons learned from the AR1500 deployment and operation on the world leading MeyGen project in Scotland. SAE has invested more than £5m in the development of this machine which is expected to be deployed on future phases of the MeyGen Project and will be available for sale to commercial developers in Q4 2019.

The AR2000 will feature an innovative new electro-mechanical pitch system, 360 degrees of yaw, upgraded onboard health monitoring and diagnostics systems and optimised critical system redundancy. The AR2000 will have a 25-year design life with quarter-life interventions for routine maintenance. The system utilises a quick connect wet-mate system, designed for rapid and safe deployment on either a gravity base or mono-pylon of up to eight turbines per day.

The partnership with GE will play a key role in the delivery of equipment and services to the second phase of the MeyGen Project, known as Project Stroma, which will see two additional Atlantis AR2000 turbines connected via a new subsea hub to a single power export cable, which will then be connected via the MeyGen substation to the National Grid. It is also anticipated that the AR2000 will be deployed at the Mull of Galloway, Sound of Islay, Portland Bill, Strangford Lough and Lombok sites. You can find out more about our projects here. 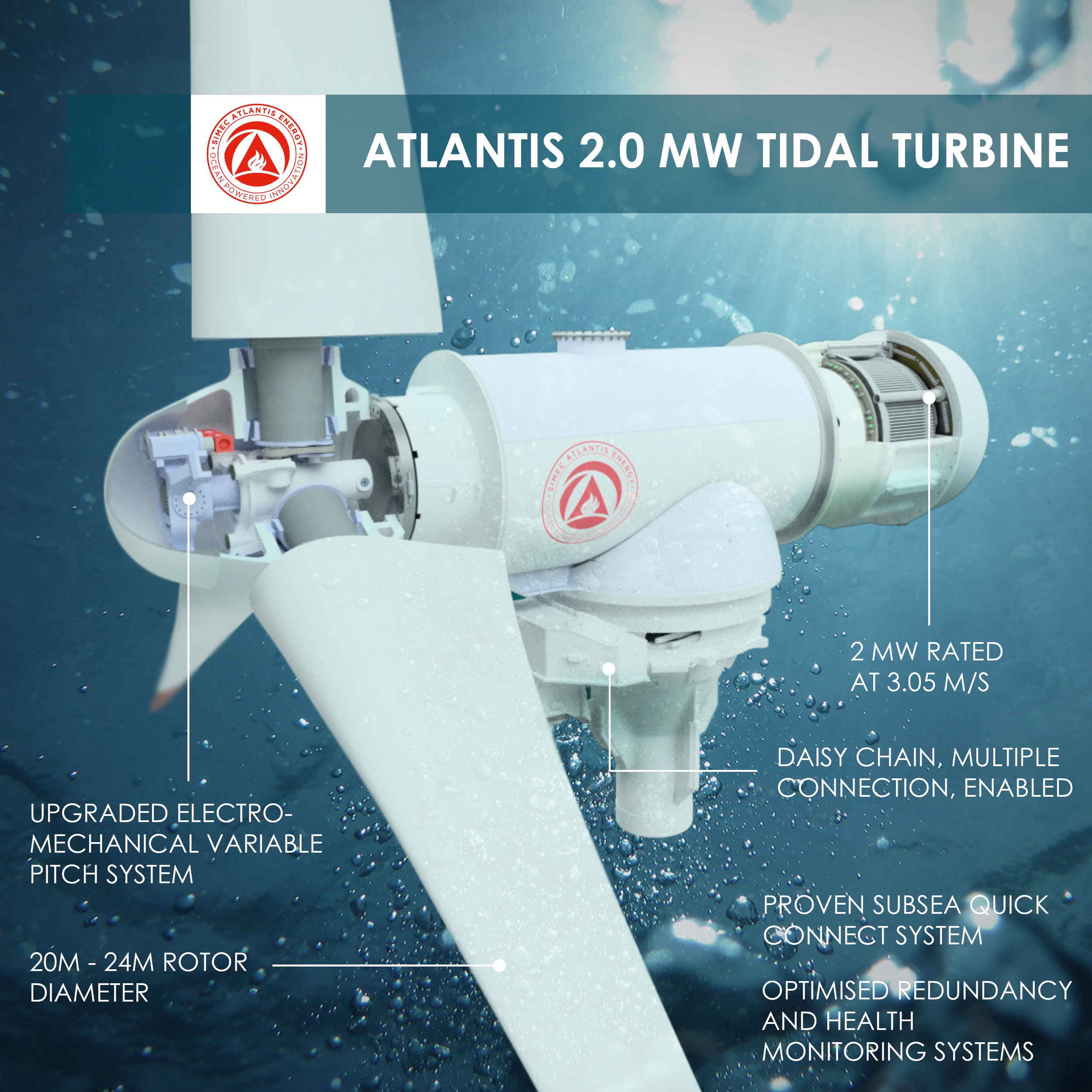 The AR1500 is a Lockheed Martin designed, 1.5MW horizontal axis turbine complete with active pitch and yaw capability. The nacelle weighs approximately 150 tonnes in air and has a design life of 25 years. The rotor diameter is 18 meters and all key operational systems have triple redundancy built in to maximise reliability offshore.

SeaGen U is a 1.5MW horizontal axis turbine complete with an active pitch system taken from the SeaGen-S series development, and yaw capability from the AR1500. The full turbine weighs approximately 150 tonnes in air and has a design life of 25 years. The rotor diameter is 20 meters and all key operational systems have redundancy built in to maximise reliability offshore.

The SeaGen system designed for floating or surface piercing foundations is an up to 1.0MW horizontal axis turbine complete with an active pitch. The full turbine weighs approximately 100 tonnes in air and has a design life of 25 years. Rotor diameter can be provided to suit the deployment and system redundancy plus accessibility combine to maximise reliability offshore.

Find out more about the history of our technology.

How are tidal turbines attached to the seabed?

AR1500 and SeaGen turbines are attached to the seabed using either gravity-based foundations, drilled monopiles, or pinned structures, depending on the local seabed topography and geotechnical conditions.

AR1500 and SeaGen turbines have been designed for retrieval once every six years for an overhaul and maintenance program which should take approximately two weeks. A standard DP2 vessel can be used to retrieve the nacelles and return them to base for these programmed maintenance activities. Both systems have on board health monitoring systems to assist maintenance crews in planning future maintenance campaigns. Each field of turbines is monitored 24/7 and is controlled remotely via a standard SCADA system. Data collected from each turbine can be used for fault diagnosis, proactive maintenance planning and to improve turbine and array performance.