Tell us a bit about the Subsea Hub designed for the MeyGen tidal turbine array.

The Subsea Hub was a collaboration between teams from ETA and Atlantis. It is a piece of equipment that enables a tidal turbine cluster to electrically connect to a single export cable, which in turn connects to the system’s shore located equipment. A turbine cluster is a group of turbines designed to operate together. The connection between each turbine and the subsea hub is via a collector cable. The MeyGen subsea hub has 4 collector cable ports enabling up to 4 turbine clusters to be connected to its export cable. Initially, it will be set up for just a single turbine. 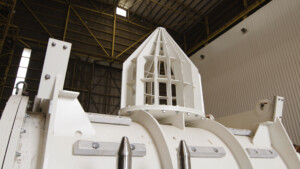 Why is the introduction of the subsea hub so important for the tidal industry?

The tidal energy industry only has a future if the energy it produces has a cost commensurate with other green energy sectors, which means it must be significantly reduced from where we are today. We concluded that the subsea hub approach provided a material drop in the cost of energy. That’s why it’s so important, and why we are doing it now. It’s going to be a key component in the systems we produce in the future.

How is the subsea hub beneficial for the MeyGen tidal array?

MeyGen is going to be huge, it has 4 turbines now but when it’s developed it will have well over 100.

The subsea hub drastically simplifies a large-scale tidal turbine array by reducing the required infrastructure. Up to now developers have only produced small size arrays , but if you imagine a 40 turbine array with 40 export cables one for each turbine, it’s going to have 40 cable entries into a building, 40 convertors and 40 connections to the grid. You’ve got forty identical systems taking up a lot of space and needing a lot of looking after.

Alternatively, let’s have a subsea hub and let’s put 8 turbines on each hub. Then you’ve got 5 export cables, 5 bigger convertors and you’ve got a much smaller onshore equipment presence. The footprint of the building will be considerably less, with 5 convertors rather than 40, simpler cable runs, and much less equipment that requires looking after. So, there are a lot of benefits, reduced offshore operations, simpler consents, but the big deal is the lower capital costs.

MeyGen is a site where the generation area is relatively close to the shore-based equipment, this means that the losses in the export cables are low. However, that’s not going to be the case for many projects. The Raz Blanchard project has the generator area about 8 kilometres from shore which means the power transmission efficiency will drop. That’s where the subsea hub has some other benefits.

How does the subsea hub help reduce these losses?

When you’re transmitting electrical energy through long distances, it’s more effective to do it at low currents which means higher voltages. Our AR1500 generators produce power at 4kV. With our Mk2 2MW turbine system, that is going up to 8 kV, with the 3MW turbine we may push that to 11 kV. To have acceptable cable losses over long distances the export cable voltages should be no lower than 33kV. The subsea hub also provides a location for transformers so the export cable voltage can be at these high voltages.

Again, without the subsea hub each turbine needs its own transformer to increase the voltage at the export cable and then to reduce it again at its converter, so the number of transformers is also reduced.

These transformers are quite large so a subsea hub with a transformer will be slightly larger than the one for Stroma.

What challenges have you faced with the subsea hub?

All the normal ones for our type of equipment, the need for high reliability in a location that’s hostile, corrosive and inaccessible.

We need the hub to be maintenance free for 25 years. It will be in a tidal site, so it must be deployable, recoverable and capable of making / breaking connections within a very short time window or the water flow becomes too fast.

Another challenge was the making of the connections. The connections are made near the seabed and they’re achieved using wet-mates, all from a DP vessel on the surface. There is some very accurate alignment required between each half of the wet-mates. We have designed a tool called the intervention tool, which will be used to install the subsea hub and to accurately control the position of the wet-mates during connect and disconnect of the collector cable as and when required.

What sets our subsea hub apart from others?

It’s the high flow speeds in which it’s located. With no tidal flow then the operations can take as long as is needed, and multiple connections can be made on the deck of vessels rather than subsea.

Nobody has needed a subsea hub in tidal flows before and that’s why ours is different from other hubs, it is all due to the environment.

It would of course be possible to mount the connection point for multiple turbines on a surface piercing structure, but we considered that to be more expensive and very likely to cause problematic consenting issues, it would have helped with the reliability though.

As far as I know, nobody else does a subsea hub, where a collector cable can be physically disconnected and removed without recovering the hub to a vessel.

How does the Saltire grant benefit the subsea hub project?

It provides some of the funds to make it happen on the MeyGen project.

In order to hit our energy cost targets for future MeyGen and Raz Blanchard turbine arrays, we need to have demonstrated that we have a subsea hub that fulfils the requirements. The MeyGen version will be tested on shore then deployed and proven, it will be a stepping-stone providing the basis of design for subsea hubs with more collector cable ports and large transformers.

So, it is allowing us to de-risk our next major projects.